From Project Arrhythmia Wiki
Jump to navigation Jump to search

Incomplete Article
You can help out the wiki by adding missing information. If this article is left incomplete for too long, it may be deleted. 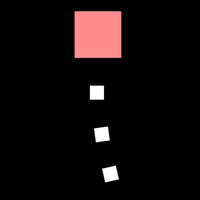 The Nanobot or Nano is the player-character in Project Arrhythmia. It is a square-shaped nanobot with three smaller cubes trailing behind that represent its remaining hit points. Usually it is depicted as pink with a white trail, but its colors can change depending on a level’s color theme.

The player moves Nano using arrow keys or joystick and maneuvers around various obstacles that appear on screen. Nano can also dash through them with high speed using space bar. Each obstacle is timed to level's music and player must endure until the level ends. If the player fails to avoid an obstacle, Nanobot will lose one of three hit points. Once Nano loses every hit point, it will shatter and level will be rewinded to the latest checkpoint.

Retrieved from "https://projectarrhythmia.wiki.gg/wiki/Nano?oldid=6121"
Categories:
Cookies help us deliver our services. By using our services, you agree to our use of cookies.